In this beer blog, we are going to get into another beer from Stone Brewery.  It is their American Stout.  If you read my earlier beer blog posts on their beers, you know the history of this west coast craft brewery.  If you have not, please, read them to get to know this California base craft brewery.  Let us get into this stout.

The coffee notes in Stone Americano Stout are bold, rich and full of American swagger. For each 120-barrel batch, we incorporated over 250 lbs. of artisanal espresso-roast beans into the mash and added in Columbus, Chinook, Amarillo and Cascade hops to invigorate the coffee taste with a slight citrus and resin hop presence. When it came time to selecting our coffee, we chose the same local roasters who contributed to our sought-after 2013 Stone ESPRESSO Imperial Russian Stout. Their fantastic beans helped us achieve this dark, hoppy and wonderfully aromatic espresso stout.

Closing, I always love anything that comes from Stone Brewing.  I cannot recall if they make a bad beer.  This is one of the few craft brewery that is good overall.  I love this beer. I love my coffee stouts.  This craft brewery is known for their hoppy and malty beers.  It is nice to see them trying to do something different.  They did a great job on this beer.  There is a nice balance between the stout and the coffee.  This is a great beer and I highly recommend this beer.  I am glad this craft brewery decided to make seasonal beers.  Go get some!  Drink it!  Enjoy it!  Metal it!  \m/ 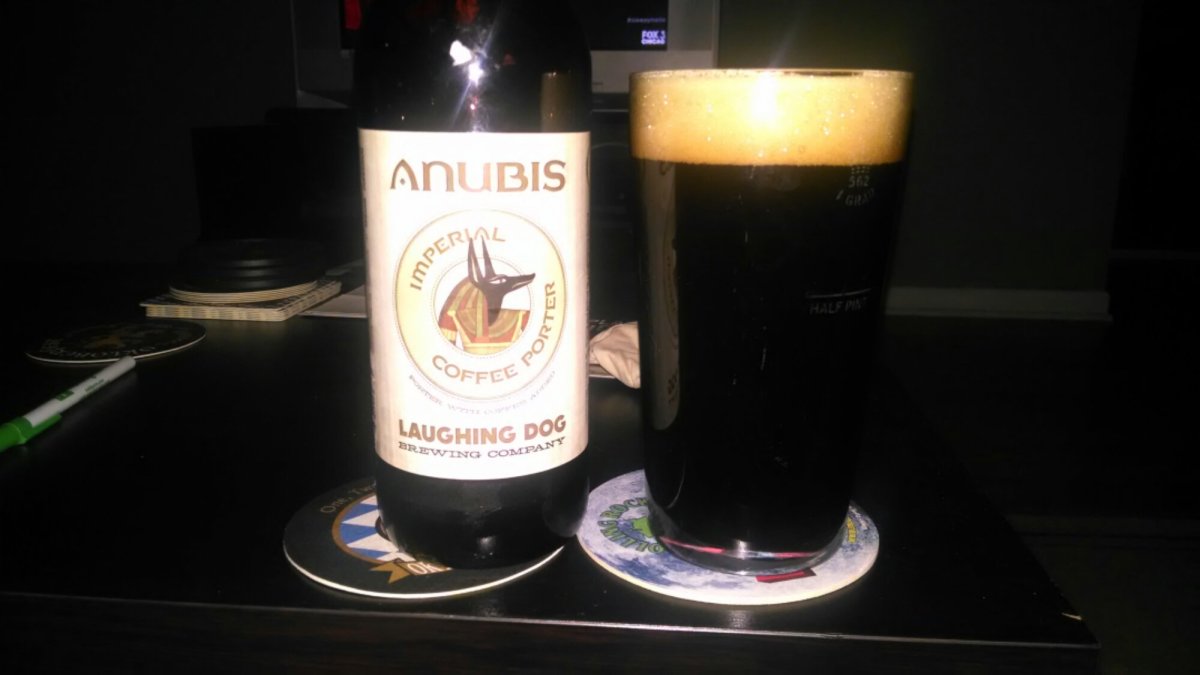 In this beer blog, we are going to sample out first brew from a brewery, which is Laughing Dog Brewing. I was excited to try it.  The beer is their Anubis Imperial Coffee Porter.  Laughing Dog Brewing is a young company.  It was stated in 2005 in Sandpoint, Idaho.  They brew several different beer styles.  They brew up to 15 different beer styles.  They have won several awards for their brews.  The dog that is featured on their beer bottles, logos, etc is their family dog, who is Ben.  There is not too much information for this eight year old company.  Let us get into beer.

It has a jet black color with a constant tan color head on this coffee porter.  The smell is toffee and hints of coffee.  The taste of this imperial coffee porter is a creamy sweet black strong coffee with roasted coffee notes.  It is not drinkable beer unless the beer drinker is a coffee porter and stout and then it is drinkable.

In closing, this brew is pretty good.  I was not too familiar with this brewery.  I was pretty interested to sit down to try this beer and do some back history.  Some reason, I believed I saw their brews in the State of Illinois.  However, this brew is pretty complex that is extremely good thing, the notes go from chocolate and coffee notes.  I will have to trade with my friend to get a few more of their beers.  I believe they are not available in the a Michigan. I recommend this brew.  Go get some!  Drink it!  Enjoy it!  Metal it!  \m/

While in DC for Savor, I had this at the after party for Savor.  The owner was clearly a huge motorcycle fan because he had some classics throughout the bar.  This bar had a special beer menu for Savor and I saw this beer from DC Brau Brewery called Hell’s Bottom Stout Ale.  Here is a little back story of this brewery.  DC Brau Brewery was founded in 2011 and was the first brewery to package in DC city since 1956.  The founded is Brandon Skall and the Brewmaster is Jeff Hancock.  All their beers are packaged in cans which is a huge trend in Craft Beer World now.

This beer is black in the glass with not head to it. It has a nice chocolate smell. It has a chocolate to dry taste to the beer.  The aftertaste is dry chocolate going on in it.   This beer is kind of drinkable for being a stout.  This beer is perfect for any seasons of the year.  There are not too many stouts a beer drinker can say that about it.

Named after one of DC’s most notorious neighborhoods, Hell’s Bottom. Where in the late 1800’s there was little money, whiskey was cheap and virtually no police force. Enter Hell’s Bottom Oatmeal Stout. Brewed with a healthy amount of flaked oats, roasted barley and both chocolate and black malts. Hell’s Bottom starts with a heavy roast character that will definitely wake up the pallet. Followed by a small kick of bitterness contributed by Northern Brewer hops. Lastly, the flaked oats contribute a smooth, cream-like mouthfeel that must be tasted to be understood. With a medium to light body this oatmeal stout is one that drinks easy in the upcoming spring/ summer season.

Coming to the end of the beer, I really enjoyed this beer.  I wish I had time to stop by their brewery to see it and try some more of their beers.  This is a very newer brewery and the future is bright by trying this beer and doing more research on them.  I hope to try some more of their beers in the near future.  I might just have to go back to DC just to visit this brewery.  I love how they put their beers in cans then the same boring ass brown bottle.  Cans protect the beer better then anything else that is out in the market.  Go get some! Drink it! Enjoy it! Metal it! \m/