It has a clear reddish to amber color with white constant head. There is not any aroma notes. The taste has a caramel to biscuits notes with a sweet to dry malty aftertaste. It is pretty drinkable.

An Irish-style red ale with a complex malt profile of biscuits, caramel and cotton candy. A well rounded and balanced amber with a dry, crisp, finish.

Closing, I am not a fan of amber, American red, and Irish red ales.  I am not saying that this beer is not for you.  It could be your beer styles.  I always try new beers in any beer styles.  Even in beer styles that I do not like.  This beer style is no different.  I try to keep an open mind.  This one is pretty average brew.  It is a great gateway beer into the craft beer world.  I recommend this beer.  Go get some!  Drink it!  Enjoy it!  Metal it!  \m/

It has a clear amber to red color to a constant white head. The aroma has a biscuits to caramel notes. The taste has a sweet malty, caramel, and biscuit notes with a dry malty aftertaste. It is pretty drinkable beer.

Named in honor of our co-founder’s bike trip through Europe,

marks a turning point in the young electrical engineer’s home brewing. Belgian beers use a far broader palette of ingredients (fruits, spices, esoteric yeast strains) than German or English styles. Together with co-founder Kim Jordan, they traveled around sampling their homebrews to the public. Fat Tire won fans with its sense of balance: toasty, biscuit-like malt flavors coasting in equilibrium with hoppy freshness. Fat Tire: Pairs well with people.

Ending, I have slowly becoming a big fan of New Belgium Brewery. I love the story of Fat Tire Amber Ale.  Co-founder using a fat tire bike to travel around Europe.  I am not a huge fan of their Lips of Faith series but I will try them here and there.  When comes to their everyday beers, I just find that they are really good.  I am not a huge fan of amber and red ales.  I love to try them and revisit them.  This is a great amber ale. I am not a huge fan but I go back to now and then. I have told people if you have not had Fat Tire, go retry them.  I highly recommend this beer.  Go get some!  Drink it!  Enjoy it!  Metal it!  \m/

It has a nice clear red to amber color with a white head.  The aroma has a sweet malt to hints of maple syrup.  The taste has a carbonated malty to slight nutty notes.  The aftertaste is a dry slight burned maple syrup to malty notes.  It is pretty drinkable beer.

Here is a desecration from the beer bottle and website (www.anchorbrewing.com):

Our fall seasonal, BigLeaf Maple Autumn Red™, was inspired by a native California tree, its incredible leaves, its delicious syrup, and the best colors of fall. Bigleaf maple thrives along the banks of California’s mountain streams. Native Californians once made rope and baskets from its bark. Today, artisans handcraft its wood and burl into custom guitars. In autumn its huge leaves, up to a foot across, can display a full range of color as they slowly turn from green to gold to red. Bigleaf maple sugaring in California dates to the 1800s; yet this tree’s unusually flavorful syrup remains the product of a small group of hobbyists. A hint of maple—including bigleaf maple—syrup in every brew perfectly complements the malty complexity, balanced hoppiness, and rich fall hue of BigLeaf Maple Autumn Red™, a red ale like no other.

In closing, I was looking forward to trying this beer.  I was pretty interested on how the maple syrup would go over with the red ale.  I liked it.  The aftertaste is pretty dry aftertaste.  There is some nice flavor and some complex notes.  I enjoyed drinking this beer.  I might be picking up some more before the end of the season.  There is so many fall seasonals that I want to get into.  I like this beer if it was for dessert or a late night beer. I know there are some people that can drink this while they are tailgating.  This is a great beer.  I recommend it.  Go get some!  Drink it!  Enjoy it!  Metal it!  \m/

We are going to sample Right Brain Brewery Northern Hawk Owl Amber Ale in this beer blog.  If you read my earlier beer blog posts, you know the history of this Northwest Michigan craft brewery.  If you have not read my earlier beer blog posts, please, read them to get to know The Throwdown winner at Ashley’s Westland in 2014.  Let us get into this Amber Ale.

It has a nice amber color with a nice white constant head on this amber ale.  The aroma has sweet candy caramel notes.  The taste has a sweet malty to slight caramel notes with a crisp finish.  This beer is pretty drinkable beer.

In the end, Right Brain Brewery makes some great brews and I have not had a bad beer from them.  This beer is no different.  Northern Hawk Owl Amber Ale is their flagship beer.  This beer style is not one of my favorites but Northern Hawk will adding it to my beer list.  It is sweet candy caramel notes with a nice finish.  It is drinkable like most amber ale in the world.  I highly recommend this beer.  Go get some!  Drink it!  Enjoy it!  Metal it!  \m/

In this beer blog, we are going to sample a flagship beer, which is Fat Tire Amber Ale, from New Belgium Brewery. It was a beer inspired from a bike ride in the Belgian county side. If you read my earlier beer blog posts, you know the history of this craft brewery. If you have not read those posts, please, read them to get to know New Belgium Brewery. Let us get into this Amber Ale.

Here is a descriation from the beer bottle:

Named in honor of our co-founder’s bike trip through Europe, Fat Tire Amber Ale marks a turning point in the young electrical engineer’s home brewing. Belgian beers use a far broader palette of ingredients (fruits, spices, esoteric yeast strains) than German or English styles. Together with co-founder Kim Jordan, they traveled around sampling their homebrews to the public. Fat Tire won fans with its sense of balance: toasty, biscuit-like malt flavors coasting in equilibrium with hoppy freshness. Fat Tire: Pairs well with people.

In closing, this light to medium body amber ale packs a ton of flavor and punch.  It is drinkable for anytime of the year.  It is a nice craft beer to get your American Lager drinkers to try.  It is also a great beer for the experience craft beer drinkers to revisit and enjoy it all over it again.  I love the story behind this beer and I love the fact they made American version of De Koninck.  It is fresher and packs more of a drinkable style.  This beer can pair with any food dish that is what their website says.  It is better with people.  I recommend you trying this beer or retrying it.  Go get some!  Drink it!  Enjoy it!  Metal it!  \m/ 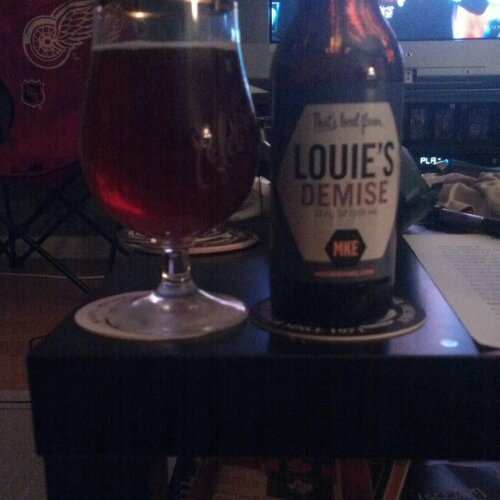 In this beer blog, we are going to take a look at the flagship beer, which is Louie’s Demise Amber ale, from Milwaukee Brewing Company.  If you read my earlier blog on their Pull Chain, you know about this brewery.  If you have not, please read the first part of that beer blog.  Let us get into the beer.

This amber ale has a nice clear amber color with a semi white head on the beer. The smell is a little malty to it.  It has a sweet malty carbonation taste without an aftertaste. This is easy drinking beer.

Our flagship brand; this medium bodied amber ale starts with a rich malt flourish that’s kept in
perfect balance by a smooth hop finish. This MBC original is similar to a German style malt beers.

Jim McCabe (owner and founder) started as a homebrewer, brewing beer with his original partner in a farmhouse in Cedarburg. On the wall was a picture from the 19th century of several men drinking from dimple glasses, every time they would drink they would toast to these men. After looking into it, they found out they were at a distant relative’s wake. That distant relative was Louie, they decided that all this time they had been toasting to Louie’s Demise.

The next question they asked was how did Great Great Uncle Louie? Our friend Bruce was able to supply us with some of the answers we were looking for.

Sheboygan, 1886,  Great Great Uncle Louie was cracked over the head with a glass and killed. For several years we speculated with our friends; why was Louie killed?  Turns out, Louie had it coming, it was over a woman!  He was picking a fight with another bar patron over his beautiful wife.  After a scuffle moved outside, Louie was sent on his way bruised up.  But, near closing time, he had returned. The fight escalated, and the man whacked Louie over his head with a glass.  Legend has it, an onlooker pried the beer from Louie’s dying hands and toasted his lustful life.

After Bruce gave us the lowdown, he reluctantly told us it was his great great uncle that killed Louie.

I have been brewing the Louie’s recipe for 15 years now. Brewing this beer is like wearing a favorite shirt or old hat; it’s reliable and comfortable. I look forward to the rich and complex malt aromas that are released during the mash, you might also catch some caramel and earthy notes. A portion of the malt bill is honey malt from Garnbrinus Malting Co. It adds that sour and honey aroma to the ale. Since the malt is really the highlight of this brew we kept it simple on the hops and the yeast. The yeast strain we use produces a subtle dried fruit flavor. We changed the yeast strain about 12 years ago to cut down on the BU’s and the malt bill has changed very slightly since we started brewing it.

In the end, there are not too many amber ales that I can say I enjoy drinking day to day.  This is one of my favorite beer from this brewery just like their Hoppy Happy India Pale Ale.  There is not too Amber Ales I love in my market. For the ones, I had in my lifetime it is high on my list. I love malty and how easy it is to drink.  This is great example of American Amber Ale and I recommend you trying this beer.  Go get some and let me know what you think of it.  Drink it!  Enjoy it!  Metal it!  \m/