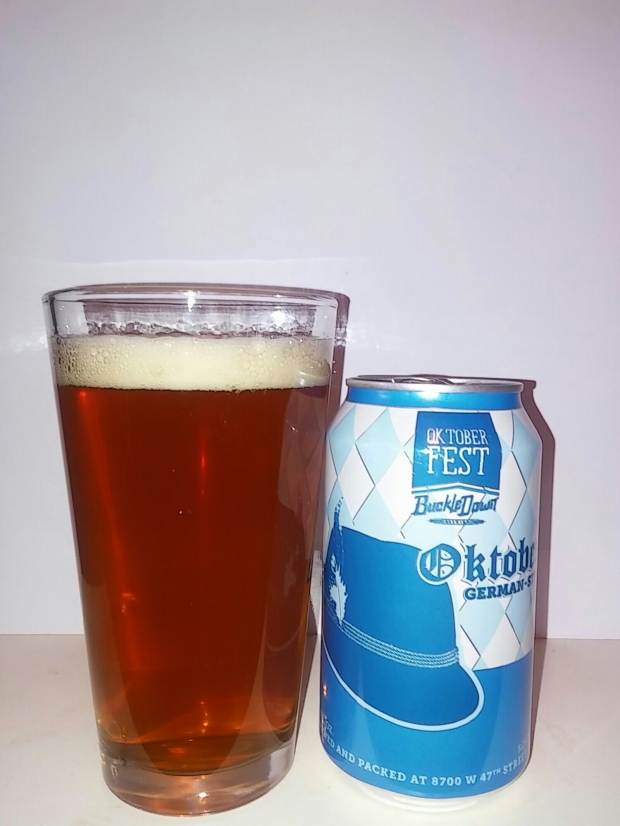 It has a slightly cloudy dark golden color to a light amber color with a white constant head. The aroma has a sweet malty to caramel notes. The taste has a light to sweet malty notes with a sweet caramel aftertaste. It is a pretty drinkable beer.

In the end, I am always looking forward to try new beers or beers that I never had.  This beer was no different.  I was in Chicago for the weekend and I stopped in one of my old liquor stores.  I came across this can, which was Buckledown Oktoberfest.  I like it. I am not a huge Oktoberfest fan but I will try new ones here and there.  I will have to make a trip to Chicago next fall to get this beer.   I highly recommend this beer.  Go get some!  Drink it!  Enjoy it!  Metal it!  \m/

In this fall beer blog, we are going to get into Harpoon Brewery and the beer is their Octoberfest.  This is the first time this beer is being featured on this blog.  If you read my earlier beer blog posts on their beers, you know the history of this northeast craft brewery.  If you have not, please, read them to get to know this 1980’s craft brewery.  Let us get into this Octoberfest.

This rich, full-bodied, malty beer – perfectly balanced with a generous dose of hops – calls out for lederhosen, dirndls, and oompah music!

Roll out the barrels!

And keep them coming, because this is going to be one festive, malty fall.  Come to the brewery and celebrate Octoberfest with us!  Prosit!

The original German Oktoberfest was brewed with one celebratory festival in mind. Harpoon Octoberfest is brewed with TWO festivals in mind; our Octoberfests at our breweries in Boston, MA and Windsor, VT. We love the style and it’s a great beer for the fall season. In true Octoberfest tradition, we threw our first festival here at the brewery in 1990. There were a couple thousand people here celebrating amidst the brewing tanks. We can’t quite fit everyone in the actual brewery now – last year nearly 18,000 revelers attended our Boston Octoberfest and nearly 7,000 joined us at our brewery in Vermont the following weekend. Prost!

Harpoon Octoberfest is a malty tribute to fall, balanced by a gentle hop bitterness. In keeping with tradition, it is a Marzen-style beer, brewed with abundant quantities of Munich, Chocolate, and Pale malts. Those malts provide a solid, full body and create the beer’s deep color. It is a rich, flavorful beer.

Closing, I like this beer.  This beer gives you something different then the rest of the Oktoberfest on the market.  Most Oktoberfest are very sweet with a heavy caramel notes. There is some with a heavy malty notes.  This one is like this year’s Sierra Nevada Oktoberfest.  This beer is true to the classic beer style.  I love how it echoes the fall season which it should.  I will be picking up some more bottles before the end of the season.  I wish I could get this in cans.  I would to take this out to cook outs or tailgating.  This is a great beer and I recommend it.  Go get some!  Drink it!  Enjoy it!  Metal it!  \m/

In this fall beer blog, we are going to sample another beer from Samuel Adams and the beer is their Fall Seasonal Samuel Adams Octoberfest Lager.  If you read my earlier blog, you know something about this brewery.  If you did not, please, go back and read the first part of that blog.  Samuel Adams is pretty well known and you might have known them before this beer blog.  Let us get into the beer.

Here is a descration from the beer bottle:

In 1810, munich celebrated the wedding of their Crown Prince with a special beer.  After 16 days the party ended, but the tradition continues.  Our version of the calssic Oktoberfest lager blends 5 roasted malts for a rich, hearty flavor that’s perfect of the season, or whatever you’re celebrating.  Jim Koch

Brewed with five varieties of malted barley for a big, rich flavor.

The first thing you notice when pouring a glass of this seasonal beer is the color. Samuel Adams® Octoberfest has a rich, deep reddish amber hue which itself is reflective of the season. Samuel Adams Octoberfest masterfully blends together five roasts of malt to create a delicious harmony of sweet flavors including caramel and toffee. The malt is complimented by the elegant bitterness imparted by the Bavarian Noble hops. Samuel Adams Octoberfest provides a wonderful transition from the lighter beers of summer to the heartier brews of winter.

The märzen style gets its name from the month in which it was traditionally brewed.  Before refrigeration March was the last month that beers could be put down for the lagering, or cold storage process.  The beers would age during the summer months and be enjoyed around the time of the fall harvest.

This beer style became a staple beer of the annual Oktoberfest celebration in Munich.  The first celebration was originally held in 1810 to celebrate the marriage of the Crown Prince of Bavaria.  The village green on which it was first held is now a huge fairground known as the Theresienwiese, after the royal bride. The Oktoberfest tradition has become a world renowned celebration of beer, running for sixteen heady days every autumn in Munich, Germany.

Samuel Adams Octoberfest pays homage to the Bavarian tradition by using generous portions of five varieties of malted barley to create a rich, toffee sweetness that is the signature flavor of this popular style.

Closing, at one time, this was one of the best Octoberfest.  Over time other breweries started to brew their verision and I just feel this beer did not change.  It just not as good as I once thought it was.  It is a malty beer drinker heaven but there are better ones.  However, I try to have one Samuel Adams Octoberfest when it is season, it is still a pretty drinkable beer.  Go get some!  Drink it!  Enjoy it!  Metal it!  \m/