In this beer blog, we are going to get into second beer from Motor City in the last few days.  It is their Honey Porter.  If you read my earlier beer blog posts on their beers, you know the history of this Detroit craft brewery.  If you have not, please, read them to get to know this Midwest craft brewery.  Let us get this honey porter.

Ending, I love honey beers not meads as much.  I am talking honey brown ales, stouts, porters etc.  I am pretty excited to see this one  in the sampler pack.  I was hoping to find good beer from this craft brewery.  I am starting to see a theme from this brewery.  I am not getting much of honey notes in the aroma and taste profile. I am pretty disappointed. It is just like their Nut Brown Ale.  It is thin to almost water down.  It is like the Michelob and Leinenkugel beer line.  I am glad I tried it at least once.  I recommend this beer at least once.   This is my thought pattern.  Go get some!  Drink it!  Enjoy it!  Metal it!  \m/ 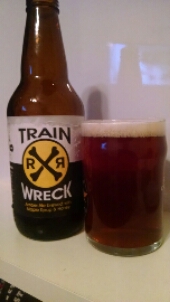 In this beer blog, we are going to get into a brewery for the first time on this blog which is Mountain Town Brewing.  It is their Train Wrack Amber Ale.  Here is a little history from their website (www.mountaintownbrew.com):

In 1996 Mountain Town Station Brewing Co. & Steakhouse opened its doors as a premier restaurant, wine cellar and micro brewery; and has grown ever since in its menu concept, wine inventory and beer recipes. In 2007, a separate company was formed called Mountain Town Brewing Company. This new brewery operation is strictly manufacturing and packaging using the same recipes that have been successfully developed for years at the brewpub. In 2008, shipments of beers such as the Gamblers Golden Ale, Railyard Raspberry Wheat and Cow Catcher Red Ale were flying out of the brewery and into restaurants and bars across Michigan. Look for these and many more beers at your favorite bar and restaurant. If they don’t have our beers request that they be put on tap!

As you can see they brew several different beer styles from cans and bottles.  We are going to get into the beer.

It has a cloudy amber color with a nice white head.  There is really no smell.  It is pretty fade.  The taste has a malty notes with a hint of honey aftertaste.  The honey makes the aftertaste smooth and a crisp finish.  It is an extremely drinkable beer.

Approach with caution. This one will sneak up on you! Brewed to keep us warm in the winter months, but easily enjoyable any time of the year. Syrup and honey give this beer an irresistible sweetness that makes it impossible to have just one. No matter what you pair this one with make sure you get plenty to eat or you might find out how this beer got its name.
ABV – 8.2%

Closing, this beer is pretty interesting brew.  I was taken a little back when tasting this beer.  I did enjoy it.  I did not know how the honey would work with this amber ale.  I had honey in beers and amber lagers.  I was pretty interested to see how some of the malty to some fruity notes would react with the honey sweetness.  This is average beer and it is nothing special.  I recommend you trying this beer just because how unique it is.  Go get some!  Drink it!  Enjoy it!  Metal it!  \m/

In this blog, Blue Moon Summer Honey Wheat Ale is going to be featured.  I told myself that I would never do a mass-produced beer.  Blue Moon is still kind of looked at as a craft beer still, which is kind of sad.  Blue Moon was launched in 1995.  It was created by Keith Villa, which was a brewer at Sandlot Brewery.  This brewery was own by Molson Coors which is now Miller Coors.  This Summer ale was launched in 2011, which was original called Honey Moon in 2006.  Let us get into this beer.

This is a clear yellow color without a head.  It has a constant bubbles in the beer. It has a slight honey smell. There is a ton of honey taste but no wheat taste in the beer.  It is a drinkable beer.

A refreshing wheat ale crafted with clover honey for a hint of sweetness and a touch of orange peel for subtle citrus notes.

In closing, I am not a fan of wheat ales and pretty much all mas-produced beers.  This beer is pretty bad.  I am only tasting a ton of honey and no wheat notes.  It is very drinkable that I will agree with.  There is better beers in the market that will give you same beer tasting notes.  All this beer is for the beginner in the craft beer world.  Once they explore this new beer world to them.  I know for a fact they will never go back as much as these beer companies think they will with their television ads.  I am not shocked that I did not like this beer.  I would say to pass on this beer.  Go get some!  Drink it!  Enjoy it!  Metal it!  \m/