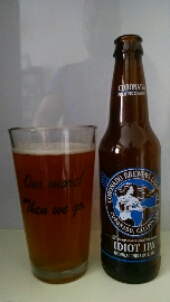 In this beer blog, we are going to get into a special release every year from Coronado Brewing Company.  It is their Idiot IPA Imperial India Pale Ale.  If you read my earlier beer blog posts on their beers, you know the history of this West Coast craft brewery.  If you have not, please, read them to get to know Coronado Brewing.  Let us get into Imperial India Pale Ale.

It doesn’t take a genius to know quality West Coast IPA’s require a stupid amount of hops.  A generous blend of Nugget hops and the four C’s – Cascade, Centennial, Chinook, and Columbus – brings forth a myriad of tropical fruit flavors and a brawny, persistent bitterness that makes for a highly intelligent brew.

Closing, Anyone can make imperial IPA. The question is you need to ask.  Is this one a good one? Idiots can throw a ton a hops into a brew kettle to hide a ton of mistakes in their beer.  This Double IPA is one of the bad ones. The malty backbone is pretty weak and it is not strong enough to cut through the hop bitterest.  This beer to me taste like hop water beer.  It takes a genius and smart brewmaster to make a good Imperial IPA.  I think you need to take some lessons from your neighbor down the street.  They are always finding away to change and do something different with their Double and Imperial IPA.  I do not really recommend this beer.  Drink it!  Enjoy it!  Metal it!  \m/