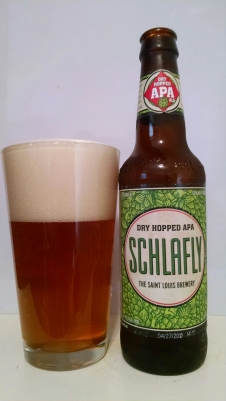 In this beer blog, we are going to get into another brew from Schlafly Brewery.  It is their American Pale Ale.  If you read my earlier beer blog posts on their beers, you know the history of this Midwest craft brewery.  If you have not, please, read them to get to know this St Louis craft brewery.  Let us get into this pale ale.

Here is a description from beer bottle:

Our Dry Hopped American Pale Ale (APA) is charged with American hops to create a bold, aromatic ale. Assertive hop flavor joins the pine/citrus aroma characteristic of American hops to balance the full body provided by North American malts. After fermentation, the beer circulates through a bed of Cascade and Chinook hops, boosting the distinctive hop aroma of this satisfying ale.

In the long view of the history of beer, American Pale Ale is a newcomer. Based on English Pale Ale, American brewers adapted this style into something new. Born out of the reverence English Pale Ales during the 1980’s American beer scene, APA is the bold, hoppier cousin of Pale Ale. With an emphasis on American hops, APA is gaining popularity with breweries racing to make these ales with such great hop characters.

Closing, I am a pretty big fan of this craft brewery when I moved to Chicago market.  I had friends bring up beer and my sister moved to St Louis.  I had honor of checking out their brewpubs and brewery.  I had a blasted.  I still say to this day their Pumpkin Ale and Christmas Ale are one of the best beers to me in market.  There is a nice balance and a great malty backbone.  I love both the hops that they used in this brew.  It uses both Cascade and Chinook.  I love this beer and I wished they would make it to Michigan market.  I love that they are finally in the Chicago market.  I highly recommend this beer.  Go get some!!  Drink it!  Enjoy it!  Metal it!  \m/