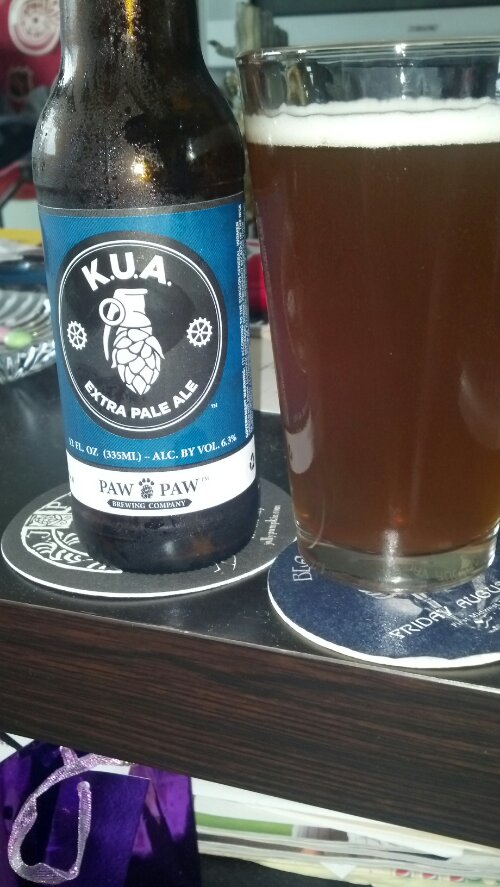 In this beer blog, we are going to get into the first brew from Paw Paw Brewing on this blog.  I had a chance to try their beer at the Michigan Brewer’s Guild Summerfest.  I stopped by their booth and talked to them along with sampling their beers.  I was back in Michigan this last weekend to see Tesla and Uncle Ted.  I did stop by their brewpub but they were closed.  I might make a trip back in to check out this brewery.  Paw Paw Brewing is located in Paw Paw, Michigan by Ben Fleckestein and Ryan Sylvester in 2010.  They had their grand opening in 2011.  They brew several different beer styles and package them in bottles.  I am looking forward to stopping in and trying everything straight from source.  Let us get into the beer.

It has a hazel copper color with a constant white head. There is no smell to this extra pale ale.  The taste is smooth caramel with a citrus hop finish.  It is drinkable.

This American pale ale carries tropical citrus notes and announces itself first with a golden color and wonderful aroma.  Inspired by cyclists nationwide that ride the urban streets, this brew is sure to refresh.

In the end, this is an awesome beer.  I have to say the newer craft breweries raising up in Michigan put the newer ones in Chicago to shame.  Michigan is growing into a pretty important state for craft beer.  They are a long ways off from Oregon and Washington.  They are gaining ground pretty quickly.  I love the hops that they use on this beer and yet there is a nice balance from the malt.  This a well-built beer and you can tell that this brewery put some thought behind this beer.  I will be looking forward to try rest of their beers.  I recommend you driving to Michigan to get this beer in your hands.  Go get some!  Drink it!  Enjoy it!  Metal it!  \m/