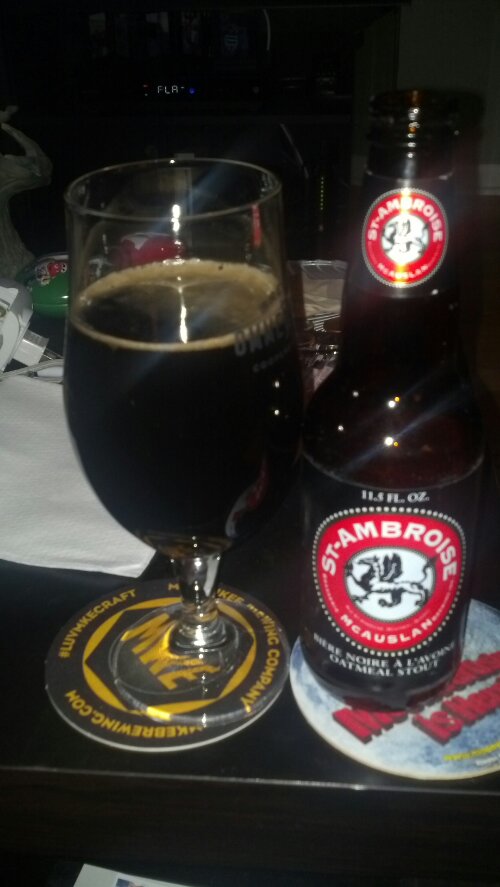 In this beer blog, we are going to try one of my favorite beer styles, which is Oatmeal Stout.  The brewery and the beer is McAuslan Brewing St. Ambrose Oatmeal Stout.   McAuslan Brewing opened their doors in 1989.  After 2002 Moosehead sold their shareholder stock, the brewery expanded into a new brewery.  They still brew Moosehead beer for the Quebec market.  Their beers are slowly making their way around the United States.  Let us get into this great brew.

It has a her black color without a head on the beer. The smell is chocolate to fresh s’mores.  The taste has a chocolate and coffee with a dry coco aftertaste. It is not that drinkable beer.

At the World  Beer Championship in 1994, St-Ambroise Oatmeal Stout received the second  highest rating of the over 200 beers in the competition and it won one  of only nine platinum medals awarded. Brewed from 40 percent dark malts and roasted barley, this intensely  black ale carries strong hints of espresso and chocolate. Oatmeal  contributes body and a long-lasting mocha-colored head to this  well-hopped beer.

5% alc/vol Available in Bottles and Draft

In closing, I did not realize this was an import craft beer.  I am not judging it by any means.  I really enjoyed this beer and I know Canada makes some good beers.  Canada is an extremely under rated country for brewing beers.  This is a heavy beer and I love when a brewery does that to their porters and stouts.  Sometimes breweries make their porters and stouts weak and light in body for that beer style.  There is nothing wrong with that I sometimes love those beers.  However, I sometimes want one heavy beer and move on with my day, this beer fits it.  I will be adding it to my line up beers.  It will be rotated in and out of my frig.  I was pretty impressed by this beer.  I recommend this beer.  Go get some!  Drink it!  Enjoy it!  Metal it!  \m/