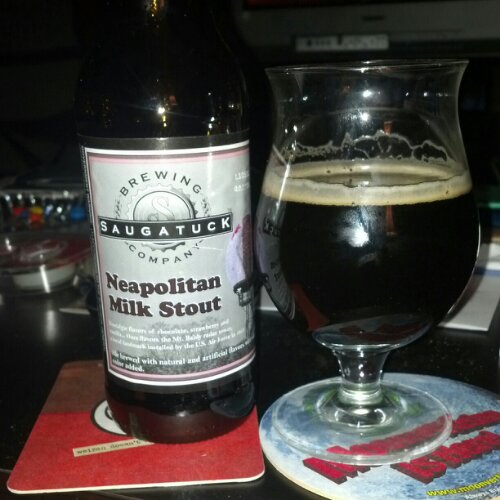 In this beer blog, we are going to check out a newer brewery from Michigan.  The brewery is called Saugatuck Brewing Company and the beer is called Neapolitan Milk Stout.  Saugatuck Brewing was founded in 2005 in Dougles, Michigan by Barry Johnson.  In mid 2008, the next part of their plan was in motion, which was to start bottling their beers.   Let us get into this beer.

Nostalgic flavors of chocolate, strawberry, and vanilla… Our flavors the Mt. Baldy radar tower a local landmark installed by the U.S. Air Force in 1937.

Closing, milk stouts always had that feeling of drinking ice cream.  Saugatuck Brewing took it to the next level.  They design this milk stout to totally take on ice cream feel.  I had it in the bottle and I could pick up Neapolitan Ice Cream, which I remember as a kid eating it all the time in Michigan growing up.  I am pretty impressive by this beer and I might have to retry their beers again.  I recommend this beer.  Go get some!  Drink it!  Enjoy it!  Metal it!  \m/