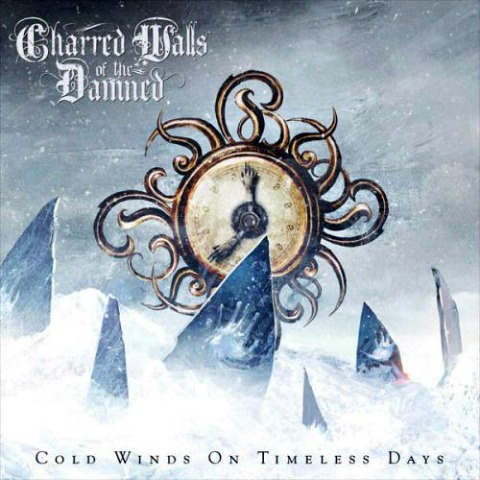 Richard Christy, who is the drummer and founder of Charred Walls Of The Damned, left Iced Earth in 2004.  The lead singer at that time was Tim “Ripper” Owens.  He began working on the Howard Stern Show. In 2009, Richard returns to music with his band called Charred Walls Of The Damned.  The name of the band came from prank calls while on the Stern Show.  In 2010, the band released their first record which was self titled.  In 2011, the band released their second record called Cold Winds On Timeless Days.  Let us get into the music.

Ashes Falling Upon Us

The music on this song is insane.  The drumming is what I expect from Richard Christy.  I am talking about speed and more speed on this song.  The lead singer’s singing is solid.  The lyrics are pretty good too.  There is an awesome guitar solo towards the middle of the song.  The guitar and bass playing is pretty strong on “Zerospan.”

I love the acoustic guitar playing with the other guitar over the top.  The bass is dancing in the background.  I just wish it was a little bit turn up on the bass.  I love Tim’s singing on this song.  The lyrics are pretty solid.  The music had some emotion and feeling behind it.  This is one of my favorite tracks off this record.  I love the ending of this song.

I love the bass playing at the beginning.  I am glad they let him out to dance up and down on that neck.  The guitar playing to me does not seem to fit.  There is a crazy drum beat.  Tim’s singing is pretty good.  I am not sure how i feel about that guitar riff over the top of the bass.  The chorus music is awesome.  I love the lyrics on this song.  I love the pace towards the end of the song.

The Beast Outside My Window

There is a nice acoustic guitar at the beginning of the song.  This is thinking man’s music.  This is very well written music.  The music picks up to the heavy part.  The guitars are using the same riff but it is heavier.  There is some solid singing from Tim.  I am not really a fan of the lyrics but the music is pretty killer.  There is a pretty good ending.

I love the bass playing at the beginning.  It is an insane riff.  The drumming is starting to sound the same in each song.  It is still pretty good.  I love the music on this song.  The lyrics are pretty good.  There is a pretty good guitar solo towards the end of the song.

I love the slow down pace on this song to the rest of fast over top speed songs on this record.  I love Tim’s singing with some good lyrics.  The music is pretty good.  The music gets pretty killer towards the middle of the song.  There is a nice guitar break about the same point.  They wrote some nice music on this track.

This song is over the top fast and in your face at the beginning.  The music is pretty good.  I love the drop off during the main part of the song.  Once again, Tim’s singing is pretty solid.  I love the bass playing on this song.  This is a great tune but I just feel this is a bad song to end the record.  This record deserves more and I do not know what it is and what song.  Overall, this was a pretty good second record.

Closing, I had interested in this band because of their lead singer, who is Tim Owens.  I discovered Tim when he was part of the legendary band, who is Judas Priest.  Yes, he was the guy that replaced Rob Halford.  I am a fan of his ever since.  Charred Walls Of The Damned first record was really good.  I still pull it out and put it in my music of the day.  I did not know how to feel towards their second record, which is one that I am reviewing it here.  Richard’s drumming is up to his standards.  It was over the top good.  I just felt at times that the drumming sounds the same in every song or most.  I had the same feeling in their first record.  There is nothing wrong with that because that is Richard’s style.  Tim’s singing is really good but I felt his singing in some songs did not fit.  I love the bass playing on this record.  This band has a really good rhythm selection.  The one thing I noticed on this record is the guitar playing.  There was some really good guitar playing.  I enjoyed most of it.  I just felt some of the guitar solo were not forced into songs.  They sound like they should be in the songs.  There is many guitar solos in many songs from other bands where the solos sound like they were forced in so the guitar player can show off.  Not every song needs a guitar solo and I am glad Charred Walls Of The Damned realizes this situation.  This was a really good record overall.  I will be adding it once in a while to my daily line up of music.  I highly recommend this record and their first one too.  Go get some!  Drink it!  Enjoy it!  Metal it!  \m/